Pete Zopfi, D.O., was running about 20 minutes behind schedule due to a surgery, but reached out to his office to let his patients know he would be late. 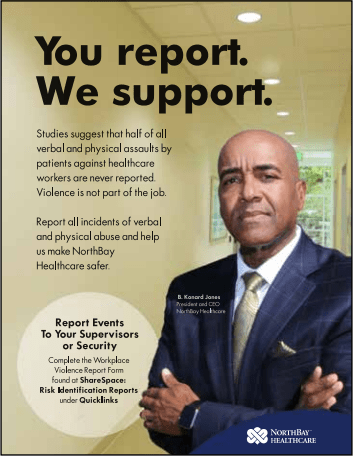 One of those patients was already agitated, pacing the floor of the exam room and muttering under his breath when the news came. Minutes later, staff could hear crashing and banging. “He seemed to be either hitting or punching the walls and cupboards in the patient room,” recalled Medical Assistant Rachel Castro.

“I asked him if he was OK and if there was anything I could get him while he waited. He swore at me multiple times,” she recalled, and each time it became louder and louder.

About then, Dr. Zopfi arrived, and heard some of the exchange. He walked directly into the patient room and spoke calmly, telling the patient that his profanity would not be tolerated. When it didn’t stop, Dr. Zopfi left the room and told the patient he would need to see another doctor.

The patient followed Dr. Zopfi into his office, slamming the door behind him. By then, security was en route. Dr. Zopfi was able to diffuse the situation rather quickly once the patient was in his office, but staff was fearful the entire time.

According to the American Nurses Association, 21 percent of registered nurses and nursing students report being physically assaulted while at work. More than 50 percent reported verbal abuse in a 12-month period. In 2013, 80 percent of serious violent incidents, reported in healthcare settings, stemmed from interactions with patients.

Potential sources of violence in healthcare facilities vary widely and can include patients, visitors, intruders and even coworkers.

At NorthBay Healthcare, 39 cases of workplace violence resulted in the need for 778 days of modified duty for staff in 2018. That was up more than 500 from 2017.

“That’s why it’s essential that we educate our workforce that violence will not be tolerated,” said Linda Pryor, risk management program manager and member of NorthBay’s Workplace Violence Task Force. “It’s unacceptable that people who dedicate their lives to healing others must put their own lives at risk just by going to work.”

The Task Force rolled out a campaign that features posters, a video, training and more. “You Report, We Support,” says the first poster, which features the image of NorthBay President and CEO B. Konard Jones.

“It was just the beginning of our campaign,” said Sean Zortman, director for Environment of Care and the task force chairman. “It’s all about early identification, de-escalation and prevention,” he said.