On a rain-soaked Saturday in March, family, friends and the NorthBay Healthcare family gathered to celebrate the life and legacy of Art DeNio with tributes, photographs and lots of memories.

NorthBay Healthcare’s chief financial officer for the past 18 years passed suddenly in December, 2018. 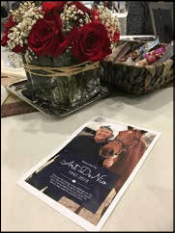 Former President and CEO Gary Passama was the first of about a dozen who spoke in front of some 200 guests. He remembered meeting Art in the 1970s at Herrick Hospital in Berkeley, and missing a first opportunity to hire him at NorthBay.

When the chance came up again, he didn’t hesitate. “I knew who I wanted and made the offer to the best candidate — 21 years later.”

Gary remembered a time in the early 2000s, when NorthBay was struggling.

“Art told our senior leadership we could turn it around, and went on to tell us several improvement ideas. A year later, we were back on track. We owe much to that day when Art inspired us.”

He also spoke to Art’s stalwart reputation with investment bankers and rating agencies. 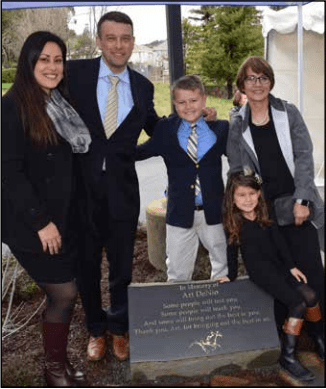 “He did it by telling the truth,” said Gary. “He was a man of integrity. They not only liked him, they trusted him,” noting that when NorthBay sought a bond sale to fund construction projects, they had more investors than bonds to sell.

“He’s the reason we were able to grow and do so much,” he said. “Art DeNio made a difference — a huge difference.”

President of NorthBay Health Advantage and Vice President of Strategic Development Elnora Cameron said she and Art bonded over a shared vision of NorthBay’s future.

“Several nights each week, we’d be working late, and we were able to have undisturbed conversations about everything, from his grandchildren and horses to books and politics. But mostly NorthBay,” she said. “He came at it, and everything he did, with the best intention. He loved this company and did everything in his power to make it financially sustainable.”

A touching slideshow presentation narrated by Janet Flaner shared that Art was nothing like the stereotypical CFO — serious, somber and only focused on spreadsheets.

“He had the biggest heart, and always went out of his way to know what was going on in your life,” she said. “In 18 years, I could never keep him on track for a meeting because he would always stop and ask someone how it was going. He was rounding before rounding was popular.”