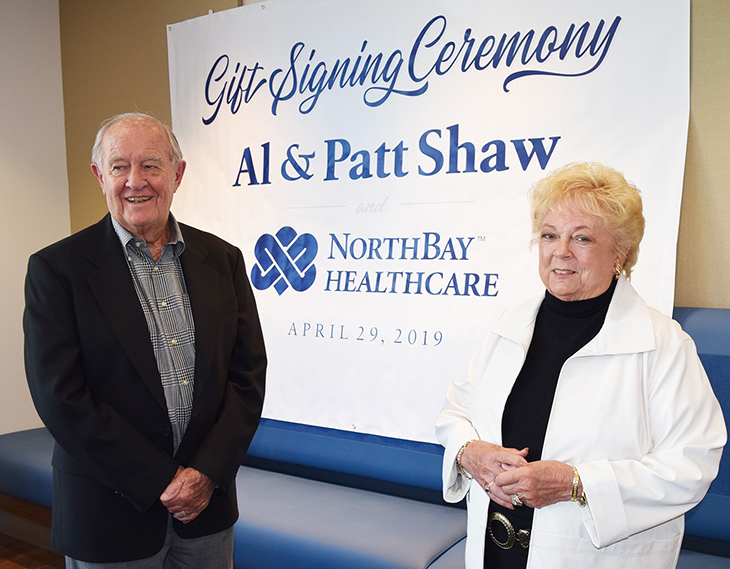 Never in NorthBay Healthcare’s history has a gift of this size — $5 million — ever been made, and the donors wanted to remain anonymous at first.

But, when Al and Patt Shaw realized they not only had the means to make a significant impact on NorthBay Healthcare’s future, but to serve as an inspiration to others in the process, they agreed to tell their story.

And on Sept. 9, during a special ceremony held in front of hundreds of NorthBay Healthcare Foundation supporters, their story, and their gift, was unveiled.

The North Wing’s kitchen and dining area are now named The Shaw Family Kitchen, in honor of the Shaw’s $5 million donation to NorthBay Healthcare.

“We hoped to be a role model by doing this,” Al said. “We know not everyone can make this kind of donation, but every single dollar is important. We all live here, and in many ways we all draw upon the services NorthBay provides. We as a community need to support NorthBay, because NorthBay supports us, our families, friends and our local community, and it provides excellent healthcare service.”

Al has always shied away from the spotlight. But, but when looking back over his highly successful career as a homebuilder and land developer, his wife, Patt, will share what he is reluctant to: As an only child who lost his mother to cancer at age 9, and as a young man raised by his grandparents, Al managed to find success through hard work, many good business decisions, some luck and a few well-timed business connections.

Much of that success occurred while the U.S. Air Force veteran served as president and chairman of the board for the Hofmann Company. Through the years, Al and his partner built more than 50,000 homes around Northern California, from Fairfield and Suisun, to Rocklin and Sausalito. “He didn’t want to build monuments; he wanted to build housing for real people,” Patt explained.

Al didn’t come to his career because of family ties, but through a humble background. His father was a superintendent at a mine in remote Utah. When his mother became ill with cancer, help was far away. “Medical care was impossible, doctors couldn’t get there in the winter,” he recalled. After she passed, his father sent the young boy to live with his grandparents, on a path away from work in the mines. The experience influenced his view about healthcare and the importance of making it available for those who need it most, he said.

In 1972, when he married Patt, an East Bay native, Cal graduate and avid cook, they embarked on a mission to support the care of veterans, animals and desperately ill children. As their family grew and blended, and they found the kitchen always was the center of where all memorable meals were prepared and important decisions were made, Patt noted.

The Shaws moved to Solano County’s Green Valley in the mid-1990s, ostensibly to assume a quieter life, but before long they found a welcoming “family” at NorthBay Healthcare and opportunities to become involved. Friends encouraged Al to join the NorthBay Healthcare Foundation Board of Directors and he did so in 2009 because “it was an opportunity to provide local support and to help our new community in a positive way.”

Before long, the couple found NorthBay’s mission of “compassionate care, advanced medicine, close to home” resonated personally with their personal mission to support those who needed healthcare the most. To support NorthBay Hospice & Bereavement, they became Presenting Sponsors for the Solano Wine & Food Jubilee, something they’ve done for more than 10 years. They’ve consistently offered items for Open That Bottle Night’s Live Auction, and have contributed to the Dream of a Lifetime program, an adult wish program for the terminally ill.

Always striving to keep their involvement low-key, they were entirely overwhelmed when presented with the Spirit of Philanthropy award — NorthBay Healthcare Foundation’s highest recognition for philanthropic support — in 2017.

The Shaws also found compassionate care to be more than words in a mission statement at NorthBay, Al said, as both he and Patt have availed themselves of NorthBay’s medical and surgical services on occasion. “NorthBay’s doctors are so approachable, so concerned and compassionate. NorthBay is fortunate to have such qualified, caring staff. You have a wonderful organization here and your motto of being close to home really strikes a cord with us.”

When the Shaws decided to make a $5 million gift, it was an easy decision to direct it to NorthBay Healthcare, they agreed. “We’ve always wanted to keep our financial contributions close to home, so we can see what our money is doing for others and how they are being cared for,” Patt said.