The Power of Human Touch

One of the hardest things new mom Lynn Brenner had to learn was how to leave her premature baby’s side in NorthBay Medical Center’s Neonatal Intensive Care Unit. But, thanks to a new NorthBay Guild Volunteer program, loving arms were ready to hold her son, Wyatt, most any time of the day or night.

Certified NorthBay Guild volunteer “cuddlers” have been helping out in the NICU, thanks to a program organized by two retired NorthBay Healthcare employees: Diane Harris, former director of Women’s Health, and Arletta Stonebraker, a 34-year veteran who had worked most recently as executive assistant to Aimee Brewer, NorthBay Healthcare Group president. 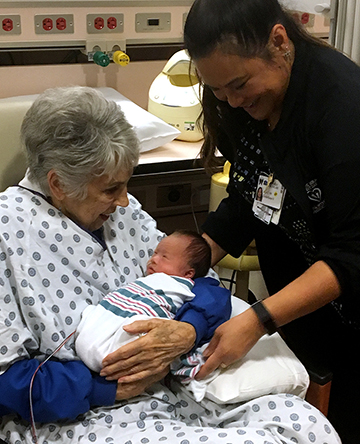 Cuddlers are specially trained volunteers who spend an hour or two — as their schedules permit — rocking, holding, hugging, humming to and cradling any newborn whose parents may not be available and who have given permission to have their child held, Diane explained.

“The cuddler’s program has grown only through word of mouth and is really developing into a positive thing,” Diane said.

Lynn was grateful for the help, because it was very difficult for her to not be with her son 24/7. Wyatt was born six weeks early at NorthBay Medical Center, and had to spend several weeks in the NICU.

“I have another son who is 4, I’m a full-time student and I realized I have to sleep and eat,” the 23-year-old Fairfield resident said. “I couldn’t possibly be with him every second. It took me awhile to accept it, though.”

She came to trust the team of nurses who were always quick to scoop him up when it was time to be fed, or to soothe him when he needed consoling.

“Oh, this little one really likes to be held and has a distinctive cry when he wants to be cuddled,” noted Anna Tiss, Clinical Nurse IV in the NICU. But nurses can get busy, especially when the NICU is full.

“Cuddlers also free up our nurses to perform their many other responsibilities while still providing the babies with that all-important human and healing touch,” said Heather Troutt, clinical manager, Women and Children’s Services for NorthBay Healthcare.

“When there are several babies on the unit and they are crying, it can kind of elevate the stress level,” Diane noted, “but if cuddlers are there to help nurses soothe the babies, it helps a lot, and the nurses and parents appreciate it.”

There have been more than 600 research papers written on the myriad benefits of the human touch for pre-term babies, she added.

“Holding the babies provides them with pain relief, stabilizes heart rates and temperatures, helps them to sleep better and cry less, and to gain weight and grow,” Heather said. “All of that means they may spend less time in the NICU and be on their way home sooner.”

“The babies are so sweet, just so sweet,” said Gayle Ratliff, a NorthBay Guild volunteer who was one of the first to sign up for the training. The 83-year-old mother of three, grandmother of five and great-grandmother of three regularly spends part of her Saturday mornings in the NICU.

“I rock slowly, talk softly to them and smooth their hair, just like I did to my own children,” she said. “I love kids, and babies are so special. I get a lot out of it, and I feel like I’m helping the babies.”

“You’re being here, even just for an hour, meant that I could get most of my charting done,” said Monica Hernandez, NICU nurse, as she scooped an infant from a cuddling volunteer’s arms.

And, having the extra help on hand is especially beneficial for the occasional infant born with Neonatal Abstinence Syndrome, Heather noted. These babies have been exposed to opiates, stimulants, sedatives or antidepressants during pregnancy and after birth their dependence on the substance continues for several more weeks.

“The baby’s central nervous system becomes overstimulated, causing symptoms of withdrawal, such as a high-pitched cry, tremors and an increased respiratory rate. Gentle cuddling has been proven to help these infants remain calm as they work through their withdrawal.”

“I used to think the NICU was a scary place,” Lynn added, “but the nurses know what they are doing and it’s a relief to know that someone will hold him when I’m not here.”