Wrapped up in Warmth

NorthBay Adult Day Center program participants were treated to some hand-made lap blankets and prayer shawls in March, knitted by volunteers in the Alice’s Embrace program. 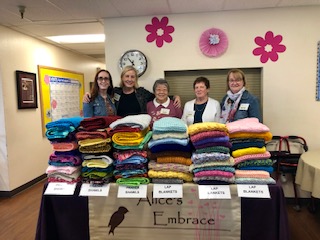 Alice’s Embrace is an all-volunteer program that was created in 2014 by Diane Lewis, an Elk Grove-area woman in honor of her mother who had Alzheimer’s disease.

The genesis of the program came from a blanket Diane had knitted for her mother when she was first diagnosed with the disease, and she often found her wrapped in it when she came to visit.

“Mom would intertwine her fingers through the stitches and that’s when I realized it had a soothing effect on her. In a way, it became her security blanket.”

After her mother’s passing, Diane created Alice’s Embrace and invited volunteers to create comforting blankets for those suffering from Alzheimer’s disease and other forms of dementia. The program has grown tremendously and now is fueled by hundreds of volunteer knitters and crocheters from around the country, she explained. The blankets and prayer shawls they make are delivered by Alice’s Embrace team members to nursing homes and assisted living facilities throughout California, southern Oregon and Nevada.

The group last made a visit to the Adult Day Center in 2015.

The team brought twice as many blankets as there are participants, and invited everyone to come up one-by-one, to kind of ‘shop’ for what they wanted. Participants were able to select the color or texture that pleased them most, said Sapna Boyapati, supervisor of Adult Day Services. “It was such a sweet thing, so nice. Everyone loved their blankets.”