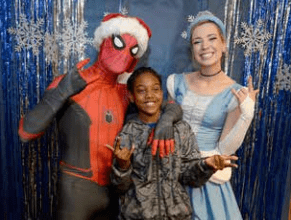 The party has been a tradition since 2002.

When Marcelo Emerson, 5, arrived at the party, Mary Jameson stepped up to greet him and his family and show off Santa’s Workshop.

Mary, director for Women’s Health Outpatient, met Marcelo a week earlier, when he came in with his father Eddie Emerson and mother Tara Bonneville, R.N., a NorthBay Medical Center nurse. Marcelo wanted to donate all of his birthday toys for the giveaway.

Marcelo and his sister, Zoe, 7, got to meet Santa and then tour his workshop. Marcelo spotted some of the toys he donated on tables, waiting for children to come and take them home. Not all the children were happy to see Santa. There were a few tears and screams, but for the most part, it was screams of delight after they traveled up to the third floor, enjoyed a chance to make an ornament, and then pose with Spiderman, aka Marco Guzman, and Cinderella, aka Hailey Jameson.

In the middle of all that, the NorthBay Healthcare carolers arrived and performed several cheerful carols in the hallway, serenading families as they left with toys, stuffed animals and a $25 Target gift card. NorthBay Healthcare Group President Aimee Brewer stopped by as well, to thank Marcelo for his gracious gift. 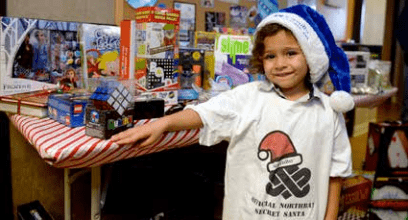 “It brought tears to my eyes,” she said. “We donate every year, because we want to give back to the community, but to see this boy step forward and donate all his presents, well, it’s inspirational!”

Marcelo seemed a little overwhelmed by all the attention, and wavered a bit about handing out gifts. But Mary and Cinderella helped him overcome his nerves, so he stepped up to pass out stuffed animals with Zoe. St. Nicholas and Mrs. Claus (aka Donald and Cathy Fisher) and helpful elf Maria Escalera took time to pose with children for family photos and hear what each child wanted for Christmas. After receiving a stuffed dog, cat or rabbit donated by Pet Smart, then it was off to Santa’s workshop to select a toy of their choice.

Several tables were filled with toys, sorted into age ranges. They were donated by employees, Guild volunteers, managers, directors and the public.

“We couldn’t do this without the generosity of everyone,” Mary said. “We are truly blessed. My NorthBay family really rocked it today.”