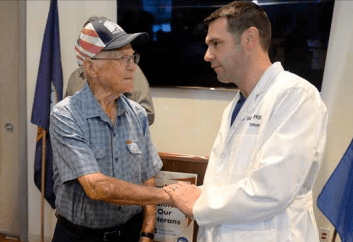 Flags representing all branches of the U.S. military and the gift of a commemorative red, white and blue baseball cap greeted NorthBay Healthcare veterans — both currently serving and having served — who attended one of two Veteran’s Day ceremonies held on Nov. 8 at NorthBay Medical Center and VacaValley Wellness Center.

It was second annual Salute to Veterans celebration, NorthBay Healthcare’s tribute to those who served.

The gatherings brought out employees from across the organization, as well as some family members, including Nate Carter, a 93-year-old Navy veteran. He is the father-in-law of Pat Carter, Inpatient Case manager for NorthBay Healthcare, and he served on a PT boat during World War II. 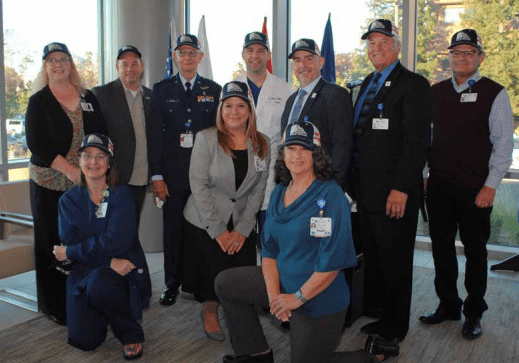 Wayne Gietz, vice president, Ambulatory Services, greeted the assembled crowd at both events, and spoke of the sacrifices that military personnel willingly make, and not just of the ultimate one.

“Your sacrifice is not just being away from your family, or missing an important milestone, it’s having to be prepared to go away at a moment’s notice, to be called to somewhere else in the world,” Wayne said.

“They wake every day knowing that their life could change in an instant,” he continued. “We should let a veteran know we are truly grateful and thankful for all they did/do to ensure our nation’s safety. As we all know, the price of freedom is high, and we cannot ever forget those who are willing to pay it.”

Shea Pribyl, D.O., cardiothoracic surgeon at NorthBay and a lieutenant colonel in the U.S. Air Force, spoke of the unique collaboration between NorthBay and David Grant Medical Center, and how both entities benefit. 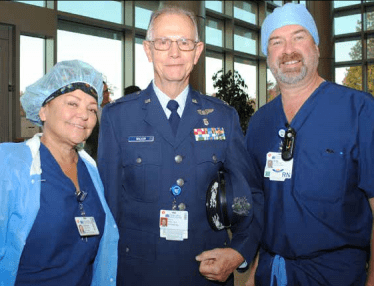 “Through its partnership, NorthBay has allowed many active-duty members to have the ability serve a higher acuity population. We airmen are then able to take that knowledge and skill set down-range. NorthBay offers us the ability to obtain readiness and trauma experience. It also provides resources and capabilities the base can’t always provide,” he said.

“The gunshot wound brought in from Solano EMS in that way serves to save the solider who was ambushed in the field,” Dr. Pribyl continued. “The heart surgery on an elderly woman here affords a soldier the chance of getting back home to his mother after massive bleeding from an IED. We complement each other for the benefit of our community. Many veterans are patients here at NorthBay as well as at David Grant Medical Center. A seamless transition between the two health care institutions allows our military members to receive care here, close to home, where otherwise they would not.”

All those who attended were invited to take a baseball cap that proclaimed “Proud Veteran” and a “NorthBay Salutes My Service” badge holder.